If you know me personally, my pregnancy was pretty well documented on Facebook and Instagram. During that time I received so many comments and a lot of support – not that my journey wasn’t without it’s negativity for any number of reasons. I’m going to share to my pregnancy here, and of course, I’m pretty much an open book, believing that women should lift each other up, so if you have questions, please feel free to comment here or send me an email at SincerelyCJinFL@gmail.com.

I intend for this to be a multi-part series. There’s really no way to cover it all in one post and I’m hoping it will be a relief to others out there who are trying to conceive, are AMA, post DVT, unexpectedly pregnant and the like.

Some of this will seem negative, some will be graphic. I’m one of those “Don’t make it pretty, just tell it like it is” kind of people. If you find a part of these posts that seem terrible or make you think I hate my SO, kids, life, family, or this baby, just know right now that I don’t. I’m sharing my thought process and it will come back around, so just hang in there. I find it really frustrating that I’m supposed to keep a happy face and pretend everything is perfect or the most amazing thing in the world just because I’m a mom. It’s not. And I refuse to pretend it is. HOWEVER, it’s a bad five minutes, not a bad life.

Nothing I share is intended to be taken as medical advice or the gospel truth. ALWAYS make informed decisions based on recommendations provided from YOUR own doctors and health care providers. This is MY own experience and yours may differ greatly.

First of all, while my SO and I have known each other since we were 14 and 15 years old (that means 25 years), we’d only been dating for 11 months when we got pregnant. We had literally just gotten engaged on July 1st of 2018, we celebrated our birthday on September 8th (I turned 40 and he turned 39), and boom, four quick weeks later on October 5th… we’re pregnant.

I think there was this assumption that we were somehow trying, or planning to get pregnant, wanted to get pregnant, thought having a baby right at that moment would be literally the best thing we could ever do… FALSE, it’s all so far from the truth it’s not even funny. I’ve seen a few snide looks whenever I tell people that this wasn’t a planned thing and it always irks me.

I had a 14 year old at home, he had a 17 year old. Literally, we’re looking at planning a wedding and within just a couple of years being two people, head over heels in love, who were in our early 40’s with the ability to do whatever whenever, and most importantly wherever. We were batting around moving out of the country, not gender reveal ideas.

In terms of kids, we WERE considering adoption and there are reasons for that. 1: Adoption sits close to BOTH our hearts. 2: As previously mentioned, I had a 14 year old, he had a 17 year old… I have yet to be informed that the process to get pregnant has changed… and we both only had one. Neither one of us has even had so much as a pregnancy scare, so we were 98% positive that pregnancy wasn’t an option for either of us. I also have DVT (deep vein thrombosis) history so I’d been told for years that more kids wasn’t an option for me.

We had actually already looked through available children, got the paperwork, made an appointment with an adoption counselor so we could go in and sit down and really start to get our ducks in a row. I remember joking with my SO about folks that start this adoption process and wind up pregnant. Thank God we’d never be those poor souls…. One day I’m going to learn to just be quiet. I might be dead when it happens, but one of these days it’s going to happen.

Anyway… I actually only took a pregnancy test because my SO suggested it. It hadn’t even crossed my mind that I might be pregnant. I figured I’d take the test, it would be some stress related thing that was causing me to be late and the test would kinda kick things in gear and all would be good.

The stupid test was supposed to be a 4 minute test… in my case it was like a 37 second test. It was one of those “you’ve got to be f$%$ing kidding me” moments. I walked out of the bathroom and took the test straight to my SO who’d gone outside to water the horses.

Now, mind you… we’d made so many plans for this time in our lives. We had things we were going to accomplish, renovations, trips, our kids had things they needed and wanted, new car, a Harley, emergency funds, school loans, maybe a credit score or two, there was a whole list… We had said to each other that for all the things we would get to experience and accomplish, having birth children together was one that we would always be a little sad about because at this age, it just wasn’t an option. No way were we starting over. And… well… that explains the whole train wreck I was as I walked out the front door on a full fledged completely selfish mission to completely wreck delivering the news about being knocked up because I refused to have this nervous breakdown by myself…

If you can picture me walking out of my 1984 trailer home that is in desperate need of renovation, wearing only a tshirt and underwear, barefoot, yesterday’s makeup, bed head, and a lit camel in my hand (yup, it’s as bad as it sounds)…. My SO turned around and looked at me, looked at the cigarette in my hand, and then looked back at me and said “NICE babe”… I just looked at him and said “shut up, it’s my last one” and handed him the pregnancy test.

That’s it. That’s how I told him. I’m old. This is bad timing. We’re in the worst possible financial situation right now… but I’M PREGNANT. Literally every single plan we had was consistently being derailed by one unfortunate ass kicking after another, but somehow we DID manage to get knocked up. WE are the only two people this could this happen to. I swear.

It didn’t get any easier telling people either. While lots of people were supportive, there were a lot of THESE comments too:

I think the comments that were hardest to get used to were the ones that pretty much assumed we’d be having an abortion, or that the only logical option was an abortion, or that if we had half a brain, we’d be HAVING an abortion. I found it amazing the ease with which these comments would just ROLL off of the tongues of random people. I understand that most of the people making these comments were really trying to be supportive in their own way, but it was not received that way.

As previously stated, I wasn’t happy about this pregnancy. Having another baby was about the very last thing I really wanted to do. It was most definitely the very last thing I needed to do, and with DVT history, I wasn’t sure if I was going to be able to carry the baby, or die myself trying to carry it. However, adoption and abortion weren’t options, so I was very scared and very stuck having this baby whatever the outcome was going to be – but apparently to many other folks an abortion was a walk in the park.

I spent a lot of time crying. I spent a lot of time assessing life. I spent a lot of time arguing with myself, praying for guidance, reminding myself that the opinions of others didn’t matter because of the people we told, very few were happy about this pregnancy, and finally I tried to force myself to come to peace with the fact that I had this tiny little bean of a baby in there, and no matter what, I was a birth mama for the second time. It was an overwhelming whirlwind of emotion and at times it just felt like I had ruined everything.

Note: Nothing REALLY worked. Until I went to the doctor and had an ultrasound. There it was, that tiny tadpole with a big ol’ heartbeat. My newfound doctor was a Godsend. She gave us what felt like a three hour ultrasound – not really, it was minutes, but it was long enough to fall instantaneously head over heels in love with this tiny little life I was growing. I don’t think I ever really reconciled anything, I just knew that I was going to have a baby, and I was finally okay with that.

I hope you found a little humor in this post as that was my intention. There are three reasons for this initial post:

Given my age and medical history, there were a lot of moving parts to this pregnancy. It was a dramatic change from being pregnant at the age of 24 and it took a lot of getting used to, so…..

Stay tuned for Part Two: I can’t stop going to the doctor.

Note: If you are a DVT survivor or suffer from blood clotting disorders, do not lose your mind like I did. I was 11 years post DVT and hadn’t had follow up care in years. I was going off the care I received previously which made pregnancy seem very dangerous and impossible. I now know that information was only partly true. With appropriate medical care and supervision, a healthy and successful pregnancy is completely possible – which is why you should call your doctor immediately and stay actively involved in your treatment plan!

LOOKING FOR SOMETHING SPECIFIC? 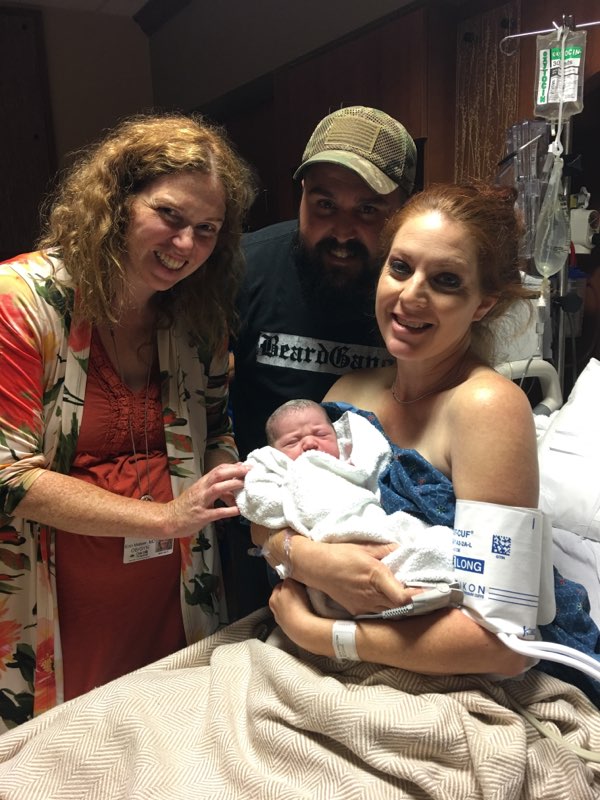